Lancaster Castle is still used today as a Crown Court. It deals with trials of the more serious criminal offences, the sentencing of offenders committed for sentence by magistrates’ courts and appeals from lower courts. 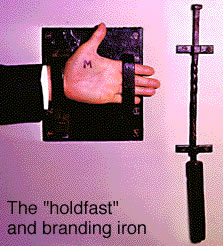 Until 1835 the only Assize for the county, Lancaster Castle saw a vast number of accused people pass through its doors, many of whom would have been on trial for their life.

An interesting relic of this age is the branding iron in the dock. This consists of a metal holdfast designed to immobilise the wrist and fingers, whilst a red-hot branding iron embossed with the letter M was applied to the brawn of the thumb. This identified the convicted person as a ‘malefactor’ or ‘evil-doer.’

The Branding Iron was last used in 1811. It was the practice of the gaoler to raise the convicted person’s hand to show the judge that a fair mark had been made. It became the rule that before a prisoner was tried he was required to raise his hand so that it could be seen whether he bore the brand mark and was therefore a previous offender.

Lancaster Castle housed two treadwheels – one to drive 23 calico looms and one to draw water from the well. The first one was installed in 1822. Lancaster’s use of the treadwheels was almost unique as most prisons did not harness the energy in any useful way.

During the summer, male and female prisoners sentenced to hard labour on the treadwheel had to work 10 hours per day at a rate of 96 steps per minute. They were allowed to rest for five minutes in every twenty. Four prisoners were allocated to every three spaces on the wheel, thereby allowing one to rest for five minutes while the rest of the team continued to turn the wheel.

When prisoners finished their 15-minute stint, they would climb down to sit on a stool, whilst the prisoner who had been resting took his place. The turnkey (prison officer) in charge of the wheelhouse was in full control and shouted out his orders each time the wheelhouse clock chimed the five-minute interval. A rule of total silence was strictly enforced and the spaces on the wheel were partitioned to frustrate communication between the prisoners.

In 1195, Richard I commissioned certain knights to preserve the peace in unruly areas – they were known as Keepers of the Peace. This was the origin of the lay magistracy in England and Wales.

Today’s title of “Justice of the Peace” dates back to 1361, to the reign of Edward III, and JPs still retain and use some of the powers conferred on them at that time to bind over unruly persons “to be of good behaviour”.

During their history, lay magistrates have had responsibility for:

Today their role is almost exclusively judicial, and JPs are appointed on behalf of the Sovereign by the Lord Chancellor.