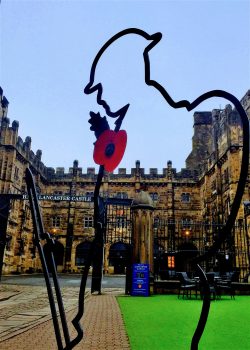 The Duchy of Lancaster has lent its support to a new fundraising campaign which hopes to raise over £15m for armed forces and mental health charities. The ‘There But Not There’ campaign launched this month will see the installation of life-sized ‘cut-out’ sculptures of WWI soldiers in iconic locations across the UK – and one of the first to be unveiled is at Lancaster Castle.

The six-foot-high ‘Tommies’ are part of a nationwide art installation marking the centenary of the end of the First World War. The figures first captured the public’s attention when they were revealed at the Tower of London, the Giants Causeway in Northern Ireland, Big Pit National Coal Museum in Wales and Heart of Midlothian Football Club in Scotland earlier this year.

Alongside the standing figures placed in high profile public locations, local community groups, such as schools, businesses, places of worship and village halls will be given the opportunity to host their own ‘silhouette installations’. These silhouettes, which are different in shape to the standing Tommy, are designed to fit into seated spaces and were inspired by an art installation created by Martin Barraud at Penshurst Church in Kent in 2016.

Those who wish to support the charity in remembering the fallen will be able to purchase smaller commemorative figures available online. At the end of the campaign, all monies raised will be distributed evenly between The Royal Foundation: Heads Together, Walking With The Wounded, Combat Stress, Help for Heroes: Hidden Wounds, The Commonwealth War Graves Foundation and Project Equinox: Housing Veterans.

Commenting on the campaign, Duchy Chief Executive Nathan Thompson said: “This is such a wonderful cause and we are delighted that Lancaster Castle has been chosen to play a part in this centenary year of the end of the Great War. The Tommy figure is both moving and inspirational and we hope that as many people as possible will get to see it in situ.”

The Lord-Lieutenant of Lancashire Lord Shuttleworth added: “The There But Not There campaign is a hugely worthwhile cause, honouring those men – local and afar – who made the ultimate sacrifice and raising money for those in need today. We want the whole community to show their support for the charity during this important year of commemoration.”

For more information relating to the There But Not There campaign please visit: www.therebutnotthere.org.uk