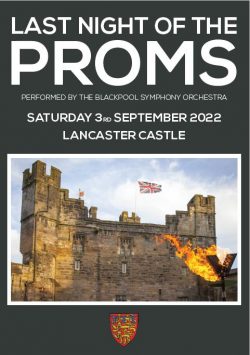 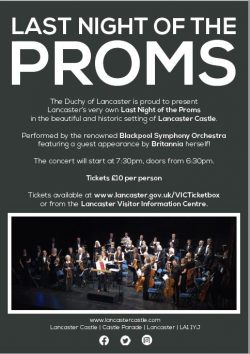 Local music-lovers have responded enthusiastically to the news that Lancaster Castle is to host its first ‘Last Night At The Proms’ next month. The original release of 500 tickets sold out within a week, leaving some would-be audience members who may have been away on holiday that week bitterly disappointed to find they had missed out!

As a result, a further batch of 100 tickets was released yesterday morning, over 50 per cent of which have also been snapped up, according to Lancaster’s Visitor Information Centre which has been managing the ticket sales on the Duchy’s behalf.

Commenting on the public response, Duchy Head of Communications Debbie Garritty said: “We have been so encouraged by the way in which the people of Lancaster have taken this event to their hearts. The prospect of hosting an orchestra of the calibre of the BSO in one of the North West’s most spectacular open air venues is incredibly exciting! We are trying hard to accommodate as many people as possible but have now released all available tickets for this year. Fingers crossed now for a beautiful and rain-free Autumnal evening on 3rd!”

The concert, which will take place on Saturday 3rd September in the Castle’s Lower Courtyard will start at 19.30 prompt. Doors will open from 18.30 to allow audience members time to secure their seats and enjoy the refreshments on offer.

Tickets are priced at just £10.00 per person (no concessions) and are available to buy from Lancaster and Morecambe’s Visitor Information Centre. They can be purchased in person, over the telephone or online at www.lancaster.gov.uk/VICTicketbox.